The History of Oktoberfest 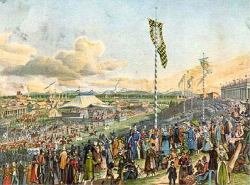 Held annually in the fall, Oktoberfest is a world famous German folk festival. It is considered one of the world’s most fun-filled celebrations.

For sixteen days, millions of visitors from all over the world enjoy parades, amusements, shows and, of course, lots of authentic German food like sausages, potato salad and apple strudel.

The first Oktoberfest was held nearly 200 years ago in celebration of Crown Prince Ludwig’s marriage to Princess Therese. Since then, Oktoberfest has grown in size and stature and is know world-wide for its friendly & festive atmosphere.